My laboratory focuses on the effects of obesity, hyperinsulinemia, and insulin resistance on androgen steroidogenesis and the interrelationship between androgens and insulin signaling in steroidogenic tissues and adipose tissue. An additional focus of my laboratory is modulation of diet and energy expenditure to improve reproductive function and metabolism in obesity. Dr. Newell-Fugate graduated from North Carolina State University College of Veterinary Medicine in 2004. She practiced clinical small animal medicine from 2004 to 2010 interspersed with the acquisition of her M.S. and Ph.D. degrees. She completed her post-doctoral training at University of Illinois at Urbana-Champaign under a National Institute of Health (NIH) K01 grant. Dr. Newell-Fugate joined the Veterinary Physiology and Pharmacology Department at Texas A&M Univeristy as an Assistant Professor in 2014. Dr. Newell-Fugate is the course coordinator and an instructor of record for VTPP 427-Biomedical Physiology II which is required for undergraduate majors in the Biomedical Sciences. She is the director of the Texas A&M Comparative Endocrinology Laboratory. Her research focuses on the intersection of the effects of diet, sex steroids, and stress on reproductive function and adipocyte lipid metabolism. Dr. Newell-Fugate was the third place recipient in the 2015 American Veterinary Medicine Association Young Investigator Award competition, received the 2018 TAMU College of Veterinary Medicine Outstanding Young Faculty Research Award, and is a 2018-2019 Montague-Center for Teaching Excellence Scholar.

As a comparative endocrinologist Dr. Newell-Fugate’s research program is focused on understanding sexually dimorphic mechanisms of endocrine disease and the identification of nutraceuticals to modulate them. She is especially interested in the effects of obesity, metabolic dysregulation, and stress on ovarian function and fertility in domestic and wild animals and in humans. Dogma in the nutrition and obesity research fields states “saturated fats are deleterious to metabolism”. However, Dr. Newell-Fugate’s research has demonstrated that particular saturated fats improve not only metabolism in obese females to favor a “healthy obese phenotype” but also improve ovarian function. Recent research in the laboratory has focused on the effects of nutrition and high fat diet induced obesity on ovarian folliculogenesis and steroidogenesis and adipocyte lipid metabolism. Using the Ossabaw mini-pig model of obesity, her research has demonstrated that diet-induced obesity drives increased androgen production from ovarian theca interna via upregulated transcript levels of steroidogenic enzymes, 3bHSD and 17bHSD (Newell-Fugate, A.E. et. al., 2015). 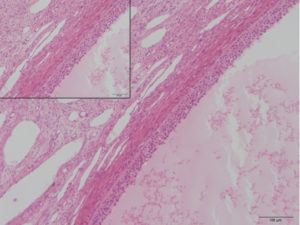 Her lab has also demonstrated that virgin coconut oil as a component of a high fat diet results in obese, yet normoglycemic animals that have a diverse, protective reproductive tract microbiome and low levels of inflammatory circulating cytokines (Newell-Fugate, A.E. et. al., 2017). On-going studies in this area have demonstrated that virgin coconut oil fed obese animals have improved glucose tolerance, decreased numbers of visceral adipocytes, and increased numbers of pre-ovulatory ovarian follicles as compared to lard fed obese animals. Such findings suggest that the pathogenesis of obesity and its adverse effects on ovarian function can be modulated by novel dietary fat sources. On-going collaborations in this area focus on the utility of virgin coconut oil to modulate cytokines, the gut microbiome (Braundmeier-Fleming et. al., in preparation), and adipose tissue macrophages to favor an anti-inflammatory milieu in obesity. Dr. Newell-Fugate’s interest in the cross-talk between metabolism and reproduction led her to an evolving area of her research program focused on the interrelationship between local androgens, estrogens, and white adipose tissue insulin signaling and lipid metabolism (Newell-Fugate, A.E., 2017). Androgens play a pivotal role in whole body insulin sensitivity as hypogonadal men with low testosterone levels are insulin resistant yet women with polycystic ovary syndrome (PCOS) with high androgen levels also are often insulin resistant. On-going studies in vivo in pigs and in vitro in rodents in her laboratory have demonstrated that local estrogens modulate the effects of local androgens on both lipogenesis and lipolysis in both males and females with more severe effects in the visceral adipose tissue compartment. On-going collaborations with local and national collaborators in this area explore the role of the lymphatics in visceral adiposity of PCOS patients and the epigenetic control of visceral adipose tissue lipid metabolism in males and females Red River Hogs (Potamochoerus porcus) while not endangered are considered a Yellow Species Survival Program in zoos within the Association of Zoos and Aquariums (AZA).  The traditional approach to the management of this and many other zoo species has been to move non-breeding animals to make new pairs in the hope this process would stimulate breeding.  However, data from Red River Hogs suggests that movement and introduction of new animals has not improved reproductive rates in this species. We have demonstrated the potential utility of the introduction of novel Red River Hog boar or sow urine to stimulate estrous cyclicity in females and increased testosterone in males (Goblet et. al. in preparation).

In collaboration with Drs. Dalen Agnew of Michigan State University and Anneke Moresco of Denver Zoo, our lab was also funded by the American Association of Zoo Veterinarians Wild Animal Health Fund to retrospectively examine the effects of age, parity and contraception use on reproductive tract lesions in male and female Suidae (pig) and Tayassuidae (peccary) species (Goblet et. al., submitted to Theriogenology). This project is in collaboration with Drs. Dalen Agnew of Michigan State University and Anneke Moresco of Denver Zoo. Our laboratory was the first to successfully collect and examine the quality of semen from the endangered Chacoan peccary (Catagonus wangeri) in its native habitat in Paraguay (Goblet et. al., 2018). As the quality of the peccary semen during the winter in this managed population was poor, additional attempts at collection from this species during different times of the year and in different locations is warranted. Dr. Newell-Fugate also has on-going collaborations in South Africa focused on health and non-invasive steroid hormone monitoring in the Common hippopotamus and the White rhinoceros. In her capacity as the reproductive advisor to the Association of Zoos and Aquariums Wild Pig, Peccary, and Hippo Taxon Advisory Group, she consults on cases of reproductive infertility and contraception in captive Suidae and Tayassuidae species. Her laboratory also runs fecal steroid profiles on a contract basis. My undergraduate and graduate courses focus on physiology as the basis for disease and pharmaceutical drug development. I strive to foster critical thinking, problem solving, and communication skills in my students. As the majority of BIMS undergraduate students enter the health professions, critical thinking and communication skills are essential for student success. Students in my classroom are engaged in a dialogue rather than a lecture; I challenge them with questions regarding basic physiology and clinical cases. My courses provide the foundation upon which students may enter careers in biomedical research or clinical medicine. It is an honor to teach the nation’s next generation of scientists and health professionals.

Annie Newell-Fugate is accepting trainees of these groups: