Cassandra Skenandore is originally from Springfield, Illinois. Cassie received a Masters degree from the University of Illinois Urbana-Champaign with her research focusing on dairy nutrition and reproduction. She is currently pursuing her Ph.D. in the laboratory of Dr. Charles Long. Her research project focuses on the development of anti-inflammatory treatments in large animals. Richard Cheng-An Chang is originally from Kaohsiung, Taiwan. He received his Master’s degree from National Yang-Ming University, where his work focused on the molecular pathways leading to obesity. Richard is now a Ph.D. student in the Golding lab, where his research focuses on sperm-inherited alterations in epigenetic programming. Yudishtar Bedi is originally from New Deli, India. Yudi received his Masters from the University of Southern California, where his work focused on peroxisome biogenesis. He is currently working in the laboratory of Dr. Michael Golding, where his research focuses on chromatin looping in the placenta and the molecular basis of the fetal growth restriction observed in fetal alcohol spectrum disorders (FASDs). 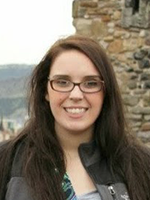 Kylee J. Veazey, Ph.D. – Originally from Amarillo, Texas, and a graduate of Texas A&M University, Kylee’s research project focused on understanding the effects alcohol has on the transcriptional control of gene expression during embryonic development. Her research was among the first to identify alcohol-induced changes to chromatin structure.